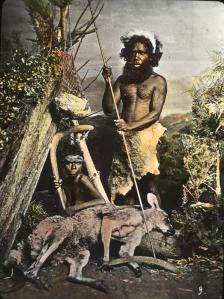 Noonday in summer, a kangaroo drapes itself on the earth’s dark shade
Under a eucalypt’s high canopy of weary leaves
While through the gully the spirit of Yarrawah gets along down low,
Downwind with woomera-flung spear in hand ready to throw.
Yarrawah dreams of the dance by the fire under towering stone eves,
Shadows cavorting around walls, walls the ancestors made,
Children of Doongarra, spirit of lightning and father of all this,
All that can ever exist. Yarrawah knows he can’t miss.

Kevin, the plumber’s apprentice, takes
His car off-road into the bush,
A hotrod engine, worn-out brakes,
Stereo blaring – what a rush!

Ears begin twitching, the kangaroo listening, that blundering loud noise
Heard in the distance, discerned in the vibration of dust,
Dangerous thunder. Has someone offended Doongarra? Where jump now,
Into which gully, between which boulders, under which bough?
Yarrawah follows his flight. It is always the old dreams that men trust.
Only the dreaming of dreams separates men from the boys.
So it was by the campfire in the days of his youth, so it must be,
And so it has always been. Who can dream better than he?

Kevin too sees the kangaroo.
He has a gun but doesn’t shoot.
He just drives at the mark in view
And runs him over – what a hoot!

Bleeding and twitching, the kangaroo cannot get back on his legs, laid
Out on the earth in the heat, fading to dust with his dreams.
Yarrawah looks in his eyes, seeing all that he sees fading with him,
World like a fire in the dawn, coals in the ash growing dim.
Spirit returns thus to dancing, returns thus the fire’s flung beams,
Shadows cavorting around walls, walls that the ancestors made,
Children of Doongarra, spirit of lightning and father of all this,
All that can ever exist. Yarrawah never could miss.

Nobody eats what Kevin kills.
No spirit could be needier.
At night he edits articles
On cars for Wikipedia.

I live in Oz and there is a strange even spooky synchronicity here between the modern age and ages past. You don’t have to go far into the bush to sense some kind of racial memory in the landscape. The original inhabitants were owned by the land and the land hasn’t surrendered its ownership just because the white man arrives thinking he owns everything. Young whites sometimes exercize their ownership by hunting or killing for the fun of it. This contrast between the ancient respect for the land and the new disrespect is a lot like the contrast in Wikipedia between those with a real respect for scholarship and those who think they can do some original research, between those who are there out of love for learning and those who are there to satisfy some itch. The poem here adapts the elegiac couplet to modern verse. The elegiac couplet was one of the most popular verse forms in the ancient world. The elegiac rhythm or meter comprises dactyls and choriambs and something about its expansive quality puts me in mind of the large, haunting rhythms of Aboriginal language and music.