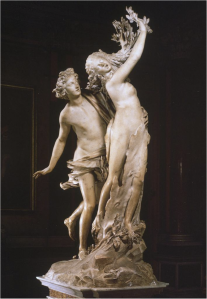 The rape was papered over in Ovid’s verse
Then snipped of outrage with such charm and wit
(Those razors that immasculate the curse
Of voyeurism), we can barely feel it.

Bernini, finding the girl penned in wood,
Sculptured her pained confusion out of stone,
The marble veins so rich in sap and blood
She appears reaching up like crystals grown.

Then he got even with the rapist god,
Catching him always cheated of his catch,
An insect trapped in amber, the cock shod
In marble now an itch that none can scratch.

I saw these sculptures in a photograph,
A rape once more on paper, recycled stuff.

The way we process human suffering both ennobles it and cheapens it. It becomes an artefact. Ovid’s Metamorphoses is a good example of it. He presents rape in mythological forms and then treats these as toys. The sculptor Bernini brought one of these toy to life, creating an image that is packaged and repackaged in the popular media. Here I have repackaged it again in a thoughtful manner, I like to think. I guess it follows on from my series of sonnets for Professor Beard’s lectures.