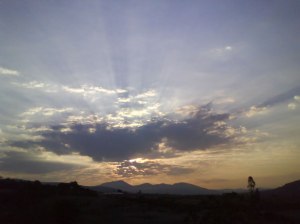 Edging along the eastern hills
The slow insinuation of light
Gathers to a red stamp that seals
The promise: everything will be alright.

No sceptic can accept this though.
Atmospheric and astronomical
Phenomena like dawn convey no
Epistolary or psychological

Assurances, not while science rules.
What we see there is gravity at work,
Photon-excited molecules.
There is no real contrast between light and dark.

All the same what we see the heart
Illuminates with meanings we don’t own,
The mind a pop-up book on art
We cannot, if we wanted to, fold down

Without ourselves being shut up too.
So when the dawn speaks to us, what it says
Is nothing revolutionary, new,
Nor worn out or burned out just – always.

Like all my stuff, this might be reworked later but it looks good for now. It reflects on a moment that we all share and it bubbles along like the dawn itself in a matter of fact kind of way. We are all shaped by scientific scepticism yet we all retain cultural meanings developed by previous generations, so we are all a bit schizophrenic really.