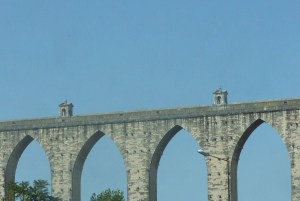 From the wellspring in the mountain
To the city further down
Is an inhospitable terrain
Where falls disturb and hills oppose
The smooth, uninterrupted flow
Of cool, fresh water into the fine fountain
Hewn from marble blocks brought down
From the quarry in the mountain
By the civic fathers long ago,
And therefore water must be taught a
Lesson it spurns with might and main,
To glide above the landscape upside down,
Down inverted valleys (arches
Keystones always keep locked up),
Sauntering upon its path of stone
Along a gradient that marches
Three hundred feet for each foot down,
Until at last it comes down to a stop
In the fountain, at which point
Fetching water takes a shorter
Time and distance than it did before,
As if the mountain had come down
To join the gossips at their chore
Of carrying water round about the town.

Aquaducts are visual art, not just ancient plumbing! They represent a set of equal and opposite forces in harmonious balance while still communicating a sense of direction or flow. They are symbols of healthy organization. In this poem, the meter alternates every three lines between iambs (da-Da) and trochees (Da-da), representing opposite forces. The rhyming scheme includes half rhymes and internal rhymes (eg ‘Fetching water takes a shorter’, where ‘water’ is internal, just as it is inside the aquaduct), and a repetive use of ‘down’ to emphasise the architectural flow of the structure. Midway in the poem, I have included the kind of conceit you find in the metaphysical poetry of the 17th centry, where an image repesents some novel idea – here the image of the arch as an inverted valley. This is the moment in the poem when you should lose your bearings a little, as you do on a carnival ride, when you are turned upside down.

Leave a Reply to The Shaved Poet Cancel reply